I Want to Play Golf with Other Boys. I’m Suing Tennessee for That Chance.

Tennessee passed a law that would keep Luc and other transgender students from participating in school sports.

In March, Gov. Bill Lee signed into law a bill (SB 228/HB 3) that bans trans students from participating in school sports. Two federal courts have blocked similar laws in Idaho and West Virginia, while a federal court in Connecticut has dismissed a challenge to that state’s policies that supports participation for trans students. Luc, along with his parents, have sued Tennessee because he is now denied the opportunity to try out for the boy’s golf team.

I was introduced to golf when I was about to turn 11. My mom took me to a golf clinic for kids at a local driving range. I got a free golf lesson from a coach and right away I was so hooked that my parents signed me up for weekly lessons. At the time, all I knew was I had fun and wanted to have a sport to get better at and was having a hard time finding one. I had tried soccer and basketball, but I was not interested in those sports and wanted to try and find something I liked better.

Over time, after getting better at hitting the ball and putting, it just got fun trying to work on my aim and technique. When I was in 7th grade, I found out there was a golf team at my school and I thought it would be good to have a team to play with. I wanted to get tips and watch other people play and see what I would have to improve on or what I was doing right.

After playing with the girl’s golf team previously, it started to feel wrong because I did not feel like I fit in with them, even though they were all kind to me. I felt out of place. It wasn’t just that I wanted to wear pants when all the girls on the team wanted to wear skirts — I felt awkward and knew this wasn’t the team for me. I am a boy, and I want to be on the boys’ golf team so I can play among other boys. 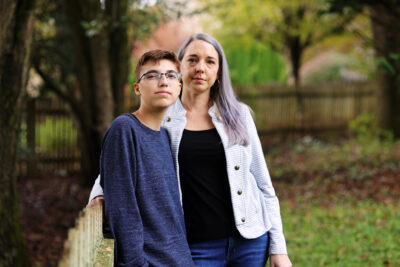 Luc aspires to play golf with other boys, freely. He’s pictured here with his mom, Shelley.

My favorite experience playing on the team was when we were in a competition against other schools. We did not win the whole competition, but there were also prizes we could win on specific holes. My best friend L. and I both won prizes that day. I was so proud of myself and L., and our whole team!

Since Tennessee’s ban on trans kids in sports passed, the main reason I’m suing the state is because it bothers me a lot to think some kids won’t play sports at all and other kids could feel as out of place as I did, especially if they aren’t on a team with their best friend like I was. It’s depressing to imagine other kids feeling so out of place and without a friend.

I have a strong peace of mind when I think how my parents are there to help me with golf, the lawsuit, and life. Filing this lawsuit lets me say that I feel disrespected and mistreated. I can’t control the law that was passed, but just because it was passed, it doesn’t mean it was right. I have standards for how I want to be treated. I want to be respected. That’s what my parents want, and it’s what I feel my peers would want. What the state has done has not even come close to those standards.

To other trans youth: I want to tell you to fight for what you believe is right and to stand up for yourself. Nothing gets done if you don’t do anything about it.

Learn more about attacks on trans student athletes and ACLU lawsuits in other states.

All Are Welcome in North Dakota

At End of SCOTUS Term, Where Are We on LGBTQ+ Rights?

How to be a year-round advocate

A Federal Appeals Court Will Decide if Trans Students Can Continue...