Defiant as Ever, Water Protectors Vow to Continue the Fight Against the Dakota ‘Black Snake’ Pipeline

STANDING ROCK INDIAN RESERVATION, N.D. — On his fourth day in office, President Trump took executive action that signaled his desire to complete the construction of the Dakota Access Pipeline. He signed a memorandum ordering the Army secretary and the U.S. Army Corps of Engineers to “review and approve in an expedited manner…requests for approval to construct and operate the DAPL” as well as an executive order to “streamline and expedite” the environmental review and approval process for so-called “high priority infrastructure projects.”

Trump’s outrageous and provocative executive actions took many people by surprise — even the new Republican governor of North Dakota was not consulted before it was signed. People and water protectors we met with this week in Standing Rock were furious and fearful. Despite this, water protectors say they are very resilient and ready to continue their opposition to the pipeline that many call “the black snake.”

Since August when the protests against the construction of the oil pipeline reached historic proportions and made major headlines, some Native-American water protectors and allies have been seriously injured by the indiscriminate use of life-threatening crowd-control weapons by law enforcement. Over 300 protestors have been hit with water cannons, tear gas, rubber bullets, concussion grenades, and mace — weapons that Physicians for Human Rights have reported can cause emotional, psychological, and physical harm to victims.  People across the globe witnessed much of this abuse through live video feeds shared through social media and footage taken by independent indigenous drone journalists.

Sadly, these reports were confirmed and further substantiated during a U.N. hearing earlier this week co-facilitated by the International Indian Treaty Council and the ACLU. Several water protectors gave testimonials about being shot with rubber bullets at point blank range, hosed with water cannons in freezing temperatures, beaten by officers, and incapacitated by concussion grenades. Witnesses described the war-like weapons being deployed indiscriminately, against medics, reporters, elders, pregnant woman, and legal observers. Protesters who were arrested testified about abuse and ill-treatment in detention, including being held in dog kennels. The testimonies were heartbreaking and disturbing.

There has been little, if any, leadership from local authorities to curtail the well-documented abuses. The Morton Country Sheriff’s Department has not released any protocol or procedures for the use of potentially deadly crowd-control weapons. There has been a resounding lack of accountability for law enforcement agents and commanders. Thus far, no officer has been charged with excessive use of force, but over 600 protestors, and even journalists like Democracy Now’s Amy Goodman, have been arrested for excessive and outrageous charges like criminal trespassing. Some were hit with outlandish felony charges and high bail bonds. More than likely, if state leaders do not require a significant change in policing tactics, law enforcement will only continue its violent and unconstitutional responses to largely peaceful protesters.

We’ve also seen law enforcement outsource their human rights abuses to private security contractors. This must be investigated, and the people responsible for releasing dogs on protestors should be held accountable. After all, even the Department of Justice has condemned the use of canines on unarmed individuals as “unreasonable.” While the Morton County Sheriff’s Department claimed last September that it created a multi-agency task force to investigate the use of force by DAPL security, we still do not know if anyone has been held accountable.

Recently, the Standing Rock Tribal Council called for the evacuation of the camps behind the Dakota Access Pipeline protests within 30 days, which means by February 19. However, the question remains whether law enforcement will use force to clear the camps and, whether on accident or with intent, injure or kill someone who refuses to leave in an act of civil disobedience. 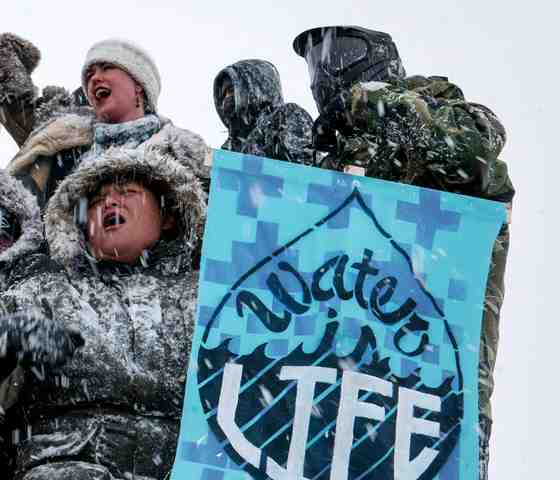 The Morton County Police Department should adopt policies and practices for the deployment of crowd-control weapons that align with civil and human rights principles:

Adherence to these principles will help increase accountability, transparency, and the safety of everyone.

But where local law enforcement quickly resorts to the massive use of less-lethal weapons, it is the responsibility of the state and federal governments to step in. The state and federal governments must rein in the county sheriff and private security contractors, and they must immediately end any unlawful surveillance practices against individuals and groups expressing their right to free speech and peaceful assembly.

If state leaders do not require a significant change in policing tactics, law enforcement will only continue its violent and unconstitutional responses to largely peaceful protesters.

Until then, the ACLU will continue to monitor the situation through legal observers and will consider taking legal action including supporting the Water Protectors Legal Collaborative. We have also released an action requesting the public to call North Dakota Gov. Doug Burgum and urge him to do everything in his power to prevent police violence against Standing Rock water protectors. Using crowd control weapons will only exacerbate the injuries and trauma that has plagued Native American communities and water protectors since the pipeline protest intensified this past August.

In his inauguration speech, Donald Trump advocated for the immediate end of “American carnage” ravaging this country. That carnage is occurring right now at the hands of law enforcement in Standing Rock. If Trump truly intends to end unnecessary violence, he must listen to the voices of Native American water protectors and those who are supporting them at Standing Rock, and he must vow to protect their right to water, sacred sites, and their future development as sovereign nations.

Advocacy: What is it?