President Trump continues to be a man of his word in all the wrong ways.

Today the president made good on his campaign promise to the Fraternal Order of Police to rescind Executive Order 13688 and put thousands of bayonets and hundreds of grenade launchers from the U.S. military back in the hands of police. It also leaves law enforcement’s federally provided drones, explosives, and Mine Resistant Ambush Protected Vehicles without oversight.

The result? Weapons of war will again be used to police our communities, no questions asked. Your town could be the next Ferguson or Fallujah.

When President Obama issued the executive order, which charged a federal agency working group with implementing oversight and protocols around the weapons of war given to local law enforcement agencies, he did so in response to calls from many Americans that their communities not be treated like war zones. Veterans from the Iraq and Afghanistan wars expressed horror that they, while on active duty overseas, were less heavily armed than the local police in Ferguson. Rep. Duncan Hunter (R-Calif.) said, “The idea that state and local police departments need tactical vehicles and MRAPs with gun turrets is excessive.” Sen. Rand Paul (R-Ky.) described the need to differentiate a “police response and a military response.”

Clearly, the new president disagrees with members of his own party, confusing Missouri with Mosul. In a candidate questionnaire from the Fraternal Order of Police, then-Republican nominee Trump said of the Department of Defense program that distributes these weapons that “[t]he 1033 program is an excellent program that enhances community safety” and that he would “rescind the current executive order.” In making its case for the 1033 program and others, the FOP found “offensive” the notion “that the equipment could be misapplied” and should therefore be subjected to federal oversight.

The reversal of E.O. 13688 dismantles this necessary oversight. E.O. 13688 created an interagency working group that included the Departments of Defense, Justice, and Homeland Security — the primary federal providers of military weapons and equipment to law enforcement. At minimum, the working group ensured that the agencies doling out these military-grade weapons were talking to one another, but it also established necessary policies, including the prohibition on bayonets and grenade launchers.

But even with federal officials now talking, we know the 1033 program is still plagued by problems. The Government Accountability Office (GAO) recently disguised itself as a federal law enforcement agency and received 1033 military ware, no questions asked. 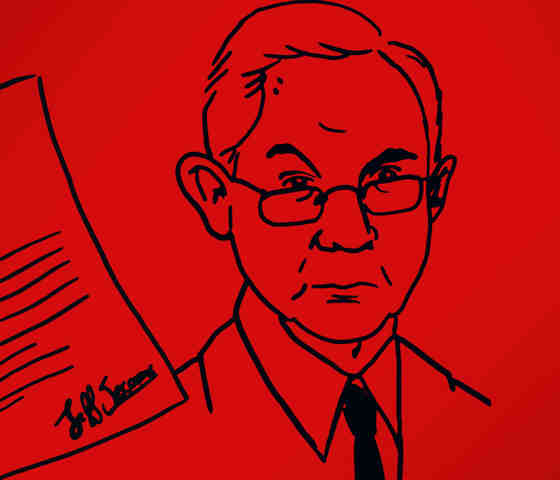 Even with the interagency working group’s oversight since January 2015, we continue to see unwarranted police militarization post-Ferguson. Just look at law enforcement’s response at Standing Rock, where armored vehicles, automatic rifles, concussion grenades, sound cannons, and water cannons were used against peaceful protestors. Consider Baton Rouge, where those organizing around the fatal police shooting of Alton Sterling were met with militarization and excessive force. And we still have SWAT teams detonating flash-bang grenades near a 9-month-oldwhen executing home searches for drugs. Do you remember Baby Bou Bou?

Many in law enforcement fail to see how military-grade weapons in America’s communities have negative consequences.

So, what’s next? There are three immediate responses needed to the rescission of the executive order:

On Inauguration Day, the White House published an issue briefreminding us that “[t]he Trump Administration will be a law and order administration.” The brief states that “[t]he dangerous anti-police atmosphere in America is wrong” and promises to “end it.” It pledges“more community engagement” and “more effective policing.”

Given today’s executive action, just how this administration plans to reconcile these goals is not clear. We know that militarized policing is not “effective policing,” as it does not deescalate, reduce bias, or improve police-community relations. And we hope this administration does not think that treating neighborhoods like war zones is an effective way to create “more community engagement.”

If the new president wants to be the president of “all Americans,” he must listen to the majority of Americans who have said they do not want weapons of wars in their communities.

Cops and No Counselors: North Dakota

Advocacy: Why Do It?